Will the event have seating?
Yes. There will be limited seating so we suggest arriving early to ensure a seat. There’s additional room in the back for standing.

I have special needs and will need additional assistance. Will there be someone to help me?
There will be a shuttle pick-up at the 9th & Franklin deck and drop-off at 9th & Grace Street for anyone who needs additional assistance with transportation to the event. There will also be staff available to direct you to the appropriate section during the event.

My group is coming in a bus. Where should we get dropped off?
Buses are allowed to drive through the loop at 9th & Grace Street for drop off. Parking is available for them as well. Please email Lindley Griffin at lgriffin@senate.virginia.gov for parking details.

Can I watch from home?
Yes. This event will be live streamed. Use the link below:
http://virginia-senate.granicus.com/ViewPublisher.php?view_id=3

Will the event be rescheduled if it rains?
No. This event is rain or shine.

The Division of Capitol Police has the distinct honor and privilege of being recognized as the ﬁrst organized policing agency in the nation and will celebrate its 400th anniversary in 2018. Our historical roots originate at the ﬁrst permanent English settlement in Jamestown, Virginia. In 1618, the Guard, consisting of 10 men was formed to protect the Governor from the hostile Indian population. By 1663, the force was expanded to a force of 20 men and assigned to protect the Governor, the Council, and the Colonial Assembly. The capital was moved to Williamsburg, Virginia in 1699 where the Guard remained an important part of the executive and legislative process. In 1780, the capital of Virginia was again relocated to a safer location, its present home in Richmond. The term “Capitol Police” was ﬁrst used in an act of the Virginia General Assembly passed on January on January 28, 1884. This act provided “for the appointment of Capitol Police certain other employees about the Public Buildings and Grounds.” The Capitol Police have steadily expanded in size and remain in service to this day.

If you have any questions or concerns regarding ornament orders or other donation opporunities, please contact us.

See all prior years’ ornaments available for purchase.

Directions to the Capitol

Directions for tours by bus

Important changes to Bank St. traffic patterns will include:

These measures will remain in place while the General Assembly occupies the Pocahontas Building.

Buses that drop off school and other groups at the Capitol extension on Bank Street to visit the Capitol can unload inside the pedestrian plaza, then park at the Department of General Services Office of Fleet Management Services at 2400 W. Leigh St. Richmond, VA 23220.

Unless directed otherwise, buses will return to pick up their passengers along the traffic circle around the equestrian Washington monument located inside the Capitol Square gate at 9th and grace streets, one block uphill from (north of) the pedestrian plaza. Group leaders will need to have direct phone or text communication with their drivers, since buses will not be able to park on or next to Capitol Square.

The Capitol building is open to visitors from 9:00 a.m. to 5:00 p.m. Monday through Saturday, and from 1:00 p.m. to 5:00 p.m. on Sundays. Self-Guided tours are available during operating hours each day our Capitol Visitors Brochure will help you get started.

In addition, self-guided tours are available during operating hours each day.

Currently on view in the Capitol Visitor Center through December 2019, “The Great Charter and the General Assembly: Founding a Legacy in 1619” is an exhibition that commemorates the 400th anniversary of the Virginia General Assembly. In 1619 the Virginia Company of London sent a set of instructions to the Virginia Colony’s newly appointed governor, Sir George Yeardley (1587-1627).

These instructions came to be known as the “Great Charter” and resulted in sweeping reforms in the management of the colony. Among the most significant was the establishment of an elected assembly. This assembly first met at Jamestown, Virginia in the summer of 1619. This pivotal event in American history marks the founding of what is today the Virginia General Assembly, the oldest representative legislative assembly in the New World. Virginia’s General Assembly has been meeting annually ever since that first historic gathering 400 years ago. Virginia’s 400 year tradition of representative government and the institution of elections stand as lasting legacies and the foundation on which American government and democracy have been built.

An exhibit celebrating the 400-year history of the Virginia Division of Capitol Police opened at the Capitol on Aug. 27.

Curated by the Library of Virginia and displayed in the large hall just behind the gift shop inside the Virginia Capitol’s entrance at 10th and Bank streets, the exhibit is to remain until the opening of the 2019 General Assembly session in January.

The exhibit incorporates research undertaken in recent years by academic interns from Virginia Commonwealth University’s History Department, who helped the Capitol Police detail history dating to its formation in 1618 at the first permanent English settlement in Jamestown.

The title of the exhibit

The first segment of a showcase in the exhibit, showing some of the earliest uniforms, (front) of Capitol Police uniforms.

Another segment of the exhibit’s showcase, with uniforms from 1778 – present shown

Seawell’s uniform was part of an extensive collection of his papers and other memorabilia that was loaned to the division by his widow, Dorothy P. Seawell, who attended the exhibit’s opening.

Capitol Police also were able to partner with the Virginia Capitol Foundation and Capitol Square Preservation Council to create a holiday ornament that represents the agency’s 400th anniversary. The ornament is on display alongside a collection of division badges and patches.

Download the full press release for the opening of the exhibit.

Read weekly vignettes about the history of Virginia Capitol Police on their website blog.

Learn more about the importance of Virginia Capitol Police with an interactive timeline on their website.

More About the Monument’s Commission

Many Virginian individuals were selected to reflect the time period before emancipation in 1865 – present day. For a list of these finalists to be honored, full history on the monument project, and the selection process, please visit the Virginia Martin Luther King, Jr. Memorial Commission’s Website. 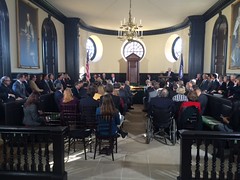 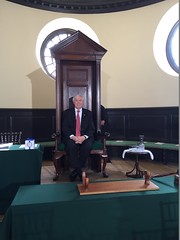 Speaker of the Virginia House of Delegates 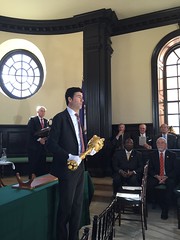 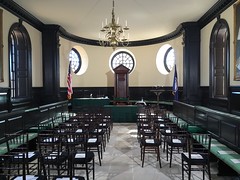 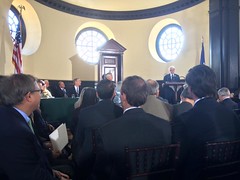 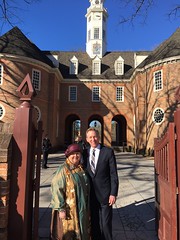 Clerks of the Senate of Virginia and House of Delegates 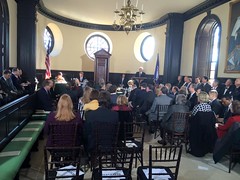 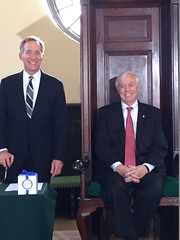 Clerk and Speaker of the Virginia House of Delegates 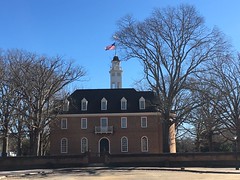 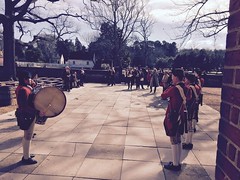 Capitol Square’s nationally-recognized historic landscape is an essential element of the Capitol experience. The monuments throughout Capitol Square represent specific eras and iconic Virginians associated with them. With the completion of an important restoration of the Capitol and the Executive Mansion in the last decade, restoration of the surrounding park is the next logical step, readying the complex for the 2016 bicentennial celebration of Capitol Square. The plan will rehabilitate one of the oldest enclosed public parks in our nation by reclaiming components of early and mid19th-century landscape designs, including the John Notman picturesque style, which predates New York’s Central Park by more than a decade. The Square’s preservation is fundamental to the Capitol’s integrity as an historic resource.

Virginia’s Executive Mansion is the oldest governor’s residence in the United States which continues to serve its original purpose. Every day, the mansion welcomes groups, ranging from school children to international dignitaries, who explore its historic spaces. The kitchen dependency, constructed in 1813 and adjacent to the Mansion, will be restored and interpreted to tell the stories of the individuals, including enslaved persons, who served Governors and their families in the 19th-century.
12